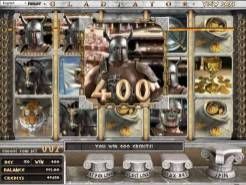 Play Now
While this slot game may not be the official license of Ridley Scott's hit film “Gladiator,” staring Russel Crowe, that doesn't mean Betsoft's “Gladiator Slots” still can't satisfy online gamblers need to play video slots and bring out the inner gladiator in them and without actually risking their lives.

This slot game, as the name implies, takes place in an ancient, Roman Coliseum, where online gamers play as a gladiator, fighting and killing your way to riches. The aim is to match three or more of the same symbol on the payline. Unlike most slots which requires you to work from the left to the right, Gladiator Slots allows players to match symbols from the end of the reel to the beginning, doubling your chances to win. This 3D video slot is 5 reels with 30 paylines. You can bet as little as two pennies to a $1. There is also a maximum bet feature, enabling the truly bold to wager up to $150. Hear the roars and cheers from the crowd when you spin the reels and hit a winning combination. There are also video cut away sequences for your pleasure.

As expected, the symbols in this slot game consist of romanesque icons, such as the armed gladiator, the Coliseum, tigers, swords and shields, gold coins, flags, empresses, horses and warriors. According to Alexander The Great, “Fortune favors the bold.” And if you're bold up to lay down some serious coin, you can have the chance of winning 3,750 times your wager if you land five Coliseum icons on the reel. You can choose to play either as the Gladiator hero or the Gladiator villain. Regardless of which one you choose, if you hit a full five of either warrior icon, you will be rewarded with 400 credits for each coin bet on the payline, for a maximum of 2,000 credits. And don't forget about the empresses. If you hit this icon on the first reel position, you will trigger the double wide feature. Furthermore, witness the gorgeous empress toss rose petals across the reels, turning the symbols to double wilds, and thus doubling your winning combinations.

Unleash the beast by landing the gladiator icon on reel 3. This commences the Gladiator Smash Wild bonus. A marble slab will cover the third reel, and the gladiator walks out and beaks down the slab. Get ready to rumble. Players enter the battle bonus feature when they hit the Gladiator icon, Coliseum icon and the Villain icon in a row across reels, 2, 3, and 4. A cut away scene will commence where you're taken off to the gladiator arena to fight to the death against a foe. You will be asked to pick a winner, and pray to the gods for victory. You will win cash for every blow landed.
Play Now

Where to Play Gladiator Slots (Betsoft)