Dragon's Cave slots: Battle the Dragon, if you Dare 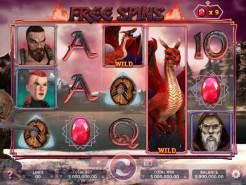 Play Now
Dragon’s Cave slots is a brand new slot game that takes you on an epic journey where you will battle dragons and peer into the eyes of magic. Partner up with Yar who fears no one and clings to his mighty sword and shield. Added features include a Dragon's Breath Feature, Dragon's Cave Bonus, Free Spins Feature, Mystery Progressive Jackpot, and a Sword Bonus. There is a progressive jackpot that’s awarded randomly as soon as it gets to $10,000. Dragon’s Cave slots is available online and mobile play. The symbols used in Dragon’s Cave slots include Yar the mighty warrior, Jaina and the Shaman, the dragon, the treasure chest, the dragon’s gem, and high playing cards from A-9. The dragon is the game’s scatter symbol and when it shows up twice you will see Yar battle him. The dragon’s breath turns three of the squares into sticky wilds for three free spins with a 3x multiplier. Get ten free spins when you get three or more of the free spins symbol and if you get another three or more free spin symbols during the free rounds, you get five additional free spins. Wilds triple your winnings in these free games. If wilds emerge, you get another free spin and the wild symbol moves one spot to the left. You want to collect gems along the way for added bonuses. Three gems trigger two stacked wild symbols, six gems trigger a three-symbol stacked wild, and nine gems trigger an expanding wild. The treasure chest is the bonus symbol and when you see three of them you will play one of two bonus games, the Dragon’s Cave Bonus or the Sword Bonus. In the first, you see Yar trying to collect prizes before the sleeping dragon awakes and you will advise Yar on which treasure chest to open. During the Sword Bonus Game, the Shaman gives power to Yar’s sword with one of seven powers. You pick the Shaman’s crystals to determine the power.
Play Now

Where to Play Dragon's Cave Slots