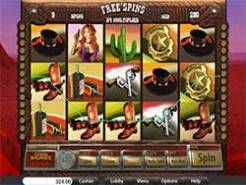 Play Now
Fans of old western movies and slots games alike should mosey on over and try their luck at Fistful of Dollars Slots. The 5-reel, 30-payline game is inspired by the famous Clint Eastwood film of the same name, and offers a variety of exciting features that will keep players entertained as they search for their own fistful of cash.

Fistful of Dollars offers coin sizes that range between $0.01 and $.10 per line, and players may wager up to ten coins per line; this means that gamers who choose to cover all 30 paylines could spend anywhere from $0.30 to $30 with every spin of the reels. Whether you’re a budget gambler or a high-roller, Fistful of Dollars has a wager amount that’s perfect for your needs. The icons in this video-style slot give players a taste of the Old West, and it’s obvious that a great deal of work went into designing them. Helping the slot stand out from the crowd are symbols like Whiskey, Six Shooters, Gold Nuggets, and other icons that tie into the theme of the game perfectly.

The Gunfighter and the Marshall are the wild symbols in Fistful of Dollars, and while they only appear on the second and fourth reels, respectively, they’re both capable of expanding to cover the entire reel. Expanding wilds are an exciting slots feature that generates the opportunity for greater, more exciting wins in the game. The scatter symbol is depicted by the Wanted Poster, which was one of the most iconic images in the Old West. In Fistful of Dollars, three, four, or five Wanted Posters anywhere on the reels will launch a free spins bonus round that will deliver 10, 15, or 20 free games to the player, respectively. The free spins round can be retriggered during the initial bonus and awards additional free games based on the number of scatters received. All prizes in the retriggering bonus round are subject to a 4X multiplier, which makes this feature very lucrative, indeed.

Many online slots games require at least three identical symbols to trigger a win, but Fistful of Dollars offers a couple of icons that only require two-of-a-kind for a win. Players looking for these easy wins will want to keep an eye out for the Gold Nuggets and the Red Haired Sally symbols; Sally even offers a top prize of 6,000 coins for players who score five on an active payline.

Online casino gamers who like to set their favorite slots to auto-play will enjoy doing so in this exciting game; the auto-play feature in Fistful of Dollars encourages responsible, budget-friendly gambling by allowing the player to determine how many spins may be completed before intervention is required. Fistful of Dollars is also available as a mobile game, which makes it easy for iOS and Android users to take this slot on the go.

Spin for a Fistful of Dollars Today

Those who are looking for an exciting, action-packed slot that’s based on a famous movie with an even more famous actor won’t want to miss the thrills on the reels in Fistful of Dollars. Register, wager, and spin today for your chance to win .

Where to Play Fistful of Dollars Slots