Dig for Treasure on the Reels in Gold Rally Slots 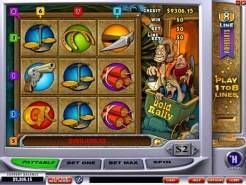 Play Now
Online gaming is similar to mining for gold; everyone is looking for that lucky, big hit. Players can do both when they spin the reels in Gold Rally Slots , which is a gold mining-themed game that offers excellent graphics, great prizes, and a progressive jackpot. If you’re ready for your chance at an amazing win, put away the pickaxe and mine for gold on the screen in Gold Rally Slots.

While most online casino gamers have played an online slots game before, Gold Rally provides an entirely different experience for players who have only played traditional 3-reel and 5-reel games. While Gold Rally resembles a normal 3-reel slot, appearances can be deceiving; this 3-reel, 8-line game not only has three horizontal paylines, but boasts three vertical and two diagonal paylines. Gamblers who have never enjoyed this type of slot before may want to think of the paylines as a game of tic-tac-toe. The symbols in Gold Rally fit well with the theme of the game, and players will find Sacks of Gold, Mine Carts, Pickaxes, and Horseshoes. While there is no wild symbol in Gold Rally, the Gold Scales icon serves as the scatter symbol. There is also an icon that depicts Dynamite, and this symbol may lead players to an entertaining bonus game.

The bonus game is triggered when the Dynamite symbol appears in the four corner spots of the Gold Rally game screen. Players are then given a chance to choose from four spots on a map; the game will dig for gold after a selection is made, so choose carefully. This feature awards a cash prize, and unlike the progressive jackpot, gamblers are not required to bet on all eight paylines to trigger the feature.

Get in on Gold Rally’s Action on Your Mobile Device

Players who prefer to take their slots on the go will love playing Gold Rally on their favorite mobile device. The game is available on both iOS and Android operating systems, where gameplay is smooth. The mobile version also offers the same great prize potential.

Gold Rally Slots may look like a small, simple game, but it hides some big surprises. The graphics and gameplay are excellent, and this entertaining slot will keep players on the edge of their seats for hours. If you’re ready to start mining for gold without getting dirty, try your luck in Gold Rally Slots .

Where to Play Gold Rally Slots