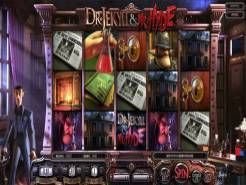 Play Now
You've all heard the stories. You've all watched the classic horror films, but now it's time for you to play Dr. Jekyll and Mr. Hyde slots. Developed by Betsoft gaming, this online casino is decked out with slick, captivating, 3D graphics, animations so sharp that online gamblers can revel at the crisp detail and sharpness of Dr. Jekyll's oak detail in his home. Atmospheric music and sounds are also included to keep gamers involved in this unique video slot adventure.

Betsoft designed this casino for players to make their bets through Dr. Jekyll as he ventures through his quests in 19th century London as he transforms into his evil alter ego, Mr. Hyde based on an experiment gone horribly awry. The video slot includes 5 reels to go along with three rows and 31 paylines. Online gamblers should be aware that this game is rich with symbols and features. Common symbols gamers should know about, are magazines, potions, laboratory notes, locked doors, old ladies, policemen, and of course, the Dr. Jekyll symbol. If the Dr. Jekyll symbol lands on either the first, third and fifth reel, you will be ushered into the bonus rounds. Gamers should be excitingly aware that if you land a Dr. Jekyll symbol in between two red potions on the third reel, be prepared for all heck to break out.

Witness Dr. Jekyll turn into Mr. Hyde as all the Jekyll symbols become Wild Mr. Hydes, and the user will be transported to new random locations. And if you're lucky enough to land a Mr. Hyde symbol on a third reel between two blue potion symbols, you will get a lucrative bonus up to 20 times your wager. And once you start playing as Mr. Hyde, be prepared to elude the police as you turn left and right through the streets of London with the chance to win 30 times your bets. Even better, if you land two Dr. Jekyll symbols on either reels 2, 3, or 5, you will begin another bonus round. There you will be tasked to select the correct potion elements to come up with the anti-serum. Speed here is of the essence, for if you're fast enough, you can earn up to 120 times your bet. Other bonuses include the red potion challenge. A red potion symbol gets you one fill unit. 100 units earns you the right to play the free spins mode. In this mode, players will be treated to a video of Dr. Jekyll turning into Mr. Hyde, to go along with earning free spins. The maximum payout for winners is 480,000 dollars.
Play Now