Step Back into the Old West with Reel Outlaws Slots 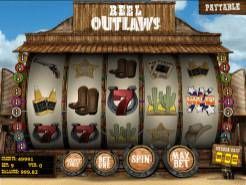 Play Now
Western-theme slots are quite popular, and the 5-reel, 9-payline Reel Outlaws offers players plenty of opportunities for old west-themed fun, excitement, and excellent wins. While this is not one of Betsoft’s 3D games, it does offer crisp, bright graphics and unique, engaging sound effects. Keep reading to learn more about Reel Outlaws, or register and play today for your chance to win.

Place a Wager to Win

Reel Outlaws offers coin sizes that range from $0.01 to $1 per line, and players may bet up to five coins per line in the 9-payline game. Those who play five coins per payline and cover every line in the game will spend between $0.45 and $45 per spin.

The symbols in the Reel Outlaws Slots game fit in well with its theme and include Cowboy Boots, Wanted Posters, Six Shooters, and Sheriff’s Badges, among others. The wild symbol is depicted by the red, white, and blue Wild Logo, and this icon can act as a substitute for almost any other symbol needed to complete a winning combination. Five wild symbols on an active payline will score the player a jackpot that could be worth 10,000 coins if five coins have been wagered on the line.

The scatter symbol is depicted by the Exploding Dynamite and offers a nice payout for players who land at least three on a payline. Unlike other slot machine games, three scatters will score the player a prize even if they have landed on an unselected payline. For example, players who have only wagered on the first three lines will still be awarded scatter wins if the symbols appear on lines four through nine. This feature adds fun to the game for online casino gamblers who choose to make smaller wagers on the slot.

The bonus symbol in the game is a Red and Gold Reel Outlaws Logo, and three or more on an active payline will trigger the Reel Outlaws bonus feature. The greater the number of bonus symbols on a line, the higher the bonus multiplier; five bonus symbols on a line will score the player a 10X multiplier in the bonus game. Once the bonus feature has been launched, players will be taken to a saloon where they’ll have the chance to shoot at empty whiskey bottles. Gamers will continue shooting bottles and accumulating prizes until they shoot the bottle that says, “Collect”, which will end the game. The prizes will then be subject to the multiplier and returned to the reels.

Play Today for Your Chance to be a Reel Outlaw

While Reel Outlaws may not have a lot of extras, it does offer plenty of high-quality entertainment. The graphics and sounds are done well, and the game play is smooth enough to keep players from losing interest. Gamblers also love the fact that scatters pay on inactive paylines, which allows for greater winning opportunities. The fun, interactive bonus feature is engaging and offers excellent prizes, and the associated multipliers can increase prizes dramatically. If you’re ready for an exciting, western-themed slot, don’t miss your chance to spin the reels in Reel Outlaw Slots .

Where to Play Reel Outlaws Slots