Games That Use the Wild West Theme 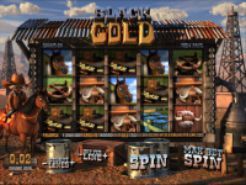 Play Now
Every slot game is based around a specific theme. The question is, which theme would you like most? One thing is certain, and that’s the presence of popular themes such as the Wild West. With wild horses, cowboys, and lots of other familiar elements, this theme has long been a popular one with plenty of people. We’ve chosen three slots here that show just how good a Wild West slot game can be.

Black Gold Slots has horses, cowboys, and characters with ten-gallon hats, and that means it is not a huge surprise to find out this one features a lot of oil, too! Five reels, 30 paylines, and a 3D appearance combine to provide a great game that has a touch of the Wild West about it, too. It offers payout multipliers, nighttime free spins, and a Drilling for Oil Click Me feature. Add in a Higher or Lower bonus feature and you’ve got the lot here.

Cowboys and Aliens by Playtech

Now, this puts yet another different spin on the idea of a cowboy-themed Wild West slot game. You will see a more basic appearance here, but the graphics are clearly based on a comic story rather than providing crucial detail, so it works well. You’ve got nine lines to win on, with an Alien Weapon feature, an Alien Attack bonus, wilds, scatters, and free games with Comic Strip wilds as well. With so much up for grabs here, it would be a real shame to miss out on this one.

Yes, another Betsoft title here, and this one is worth including because it offers a lot by way of a true Wild West theme. Don’t be deceived by having just nine paylines to bet on, because this one takes place outside a saloon bar and there are lots of familiar icons on the reels. Look for cowboy boots, sheriff’s badges, and pistols, among other things at Reel Outlaws . The scatter is represented by some dynamite, with three or more awarding a prize. But do watch out for the Reel Outlaws logo, because this is the trigger to get into the bonus feature. There’s no clue to the nature of the bonus, but surely that is part of the fun of trying to trigger that feature? Try a Wild West slot game or two today , so you can find out how good they are to play and win!
Play Now