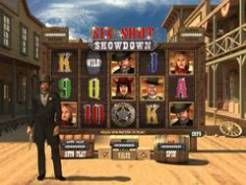 Play Now
Many children fantasize about being the gunslinger who rides into town to deliver retribution to the bad guys, and online casino players can now live out their fantasies in Six Shot Showdown Slots. If you’re ready for your chance to win cold, hard cash in this 5-reel game, 243-payline game, register and play today.

Cover Every Payline with a Single Bet

Six Shot Showdown Slots may not be as flashy as some of the latest video slots, but it is a 3D game that offers plenty of quality entertainment for gamblers. The bet system in Six Shot Showdown is unique in that players do not place bets on individual paylines; instead wagers are placed as flat bet on all 243 paylines. Gamers can choose any wager between $0.25 and $125 per spin, making this slot perfect for both low and high rollers.

Shoot ‘Em Up Icons on the Reels

While the symbols in this game include classic icons like A, K, Q, J, 10, and 9, the slot also boasts an assortment of bad guys and gals. The Barrel acts as the substitute symbol in Six Shot Showdown, and it can fill in for almost any other icon on the screen.

Six Shot Showdown’s scatter symbol is depicted by the Sheriff’s Badge, and it offers a payout of 1,250 coins when at least three appear anywhere on the reels. Three scattered Sheriff’s Badges will also launch the bonus round, which offers incredible entertainment and enormous prize potential. Most players view the Showdown Bonus Feature as the highlight of the slot. Once triggered, this bonus feature transports gamers to a dusty Wild West landscape and offers them the opportunity to take down the outlaw in a truly heroic fashion. Gamblers have six chances to shoot the outlaw, and the game allows the slot player to aim and shoot on their own terms. Well-placed shots will defeat the bad guys, award prizes, and provide the chance to fire at another bandit; misses give the gunslinger a chance to shoot back, ending the bonus round.

Atypical Adventures in the Game

Six Shot Showdown Slots also offers a randomly awarded progressive jackpot that could appear at the end of any spin; the jackpot grows with every wager placed on the game, making it an excellent win for those who manage to land it. The auto-play option provides players with some unique choices: Not only can a standard per-spin bet be set, but the game allows gamblers to select maximum loss and win limits. This feature allows gamers to play more responsibly without distracting them from the game’s high entertainment value.

Players who prefer slots with a western theme and a bonus that allows for maximum engagement won’t want to miss the thrills in Six Shot Showdown. The fantastic graphics, high-quality bonus feature, and the opportunity to score an incredible wins with the progressive jackpot will keep every slots enthusiast entertained. If you’re ready for a rootin’, tootin’, shootin’ good time, give Six Shot Showdown Slots a try .