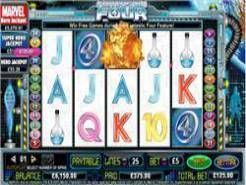 Play Now
If you are a fan of Marvel cartoon characters, and a fan of online slot games, you may already know those two worlds have collided. When you think about it, it makes sense that Marvel slot games would work so well. After all, cartoon characters are relatively easy to replicate online. We’ve had a look at some of the titles that came to fruition with the license agreement achieved by Playtech. While these titles are no longer available, it’s still good to look back at what was achieved by creating them. And you might wish to know a lot of the titles are being re-used and branded differently, so you can still play versions of some of these games. Look out for the Age of the Gods series to learn more, and see if you find some of the elements familiar.

Have you seen the movie relating to these characters? Maybe you tried the slot too, although it is now part of the Age of the Gods series. If you have tried the Furious Four slot game, you might find some familiarity there if you played the original Marvel Fantastic Four slot as well.

Don’t make this guy angry… you wouldn’t like the results! The Incredible Hulk has appeared in a movie, in cartoons, and of course in the famous TV show that featured both the Hulk and his human alter-ego. This is arguably one of the most famous characters for many, although the movie perhaps wasn’t as successful as some other titles.

The title gives away the fact we had two previous versions of the Iron Man slot to try as well. The character worked well within the slot games, and as was the case with other popular superhero slots in this range, we had bonus features based around Iron Man and other connected elements. It’s a shame these games are no longer available, but there are still other superhero slots available to play. You will find these other slots at plenty of online casinos, and we’ve reviewed plenty of superhero slot games as well. We suspect they will continue to be popular despite (or perhaps because of) the withdrawal of the Marvel slots. They were good while they lasted, and at least we now have different versions of those slots to try and enjoy instead. Check out the Age of the Gods series now.
Play Now