Dive into Our Choice of Underwater-Themed Slots 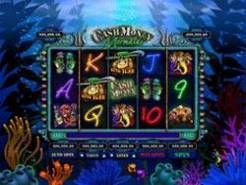 Play Now
Would you head into the murky depths of the sea or ocean? Most of us like a dip in the sea occasionally, but we don’t go to the depths these slot games do. Heading beneath the waves to discover the worlds beyond the surface is a revealing thing to do. And to prove that, we have picked just three of the dozens of slots that use an underwater theme to tempt you into a game or two.

We had to pick this one, because while it is one of the older titles in the WGS Technology collection, it still stands up to scrutiny today. The graphics may be more basic than you are used to, but it does set the tone and makes for an interesting game to play. The submarine appears on every reel but the third one, and can help you win on up to 25 lines as it is wild. It won’t stand in for the 20,000 Leagues logo though, which is used not as a scatter, but as another wild. This one replaces everything else. Get at least one submarine appearing with a logo and you win 10 free spins for every submarine you get on the screen.

We’re all familiar with the legend of mermaids, and here we see them on the reels of Cash Money Mermaids Betsoft slots . The bubbles are rising here and the background is neatly designed to give you the feel of being underwater. With five reels and 25 lines, there is all to play for, too. The scatter takes the form of two words – Cash Money. The wild is also used as the relevant word. Three of the scatters reward five free spins, and while that doesn’t sound like much, there’s a character called King Tune that can change from one to all the symbols on the reels into wilds…

Playtech takes us into the great blue here, with a relevant blue-themed game packing in 25 lines over five reels. The killer whale is a killer symbol to get, acting as a wild for all but the scattered pearl and doubling wins, too. That pearl is worth finding, because three or more will secure up to 33 free spins. There is a multiplier to get too, which could be worth up to x15! That gives you even more reason to play this underwater slot.
Play Now