Which Fairytale Legends Game Is the Best? 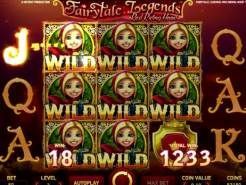 Play Now
NetEnt has developed many engaging slot games, but one of the best must surely be the series of games based on famous Fairytale Legends. In this series of games, we can meet Red Riding Hood and Hansel and Gretel, while also learning about a famous mirror… So, which game is going to appeal most to you?

Red Riding Hood appears as you begin to play this charming game. It comes with many appealing bonuses, with seven of them to trigger as you play. Red is the wild icon here, so she is useful to spot on the reels. Many design elements are identical to the other games in the series, but that is no bad thing. The bonuses are divided into three randomly triggered ones and three that could be awarded when the bonus round is triggered.

This game is of course based on the Snow White fairytale. She appears in the game too, although she doesn’t act as a wild (and neither does anything else). You will get a mirror and a golden box appearing as bonus icons though. There are three random bonuses in Mirror Mirror, along with a mirror respin feature that can occur in the base game. As if that wasn’t enough, you could also trigger the Mirror Mirror Bonus with three of those gold boxes. There are three bonuses you could win from this round, with one revealed at random when you open one of the boxes.

Remember the story of Hansel and Gretel? Now you can meet them in this entertaining game from NetEnt. Watch as they walk along while the reels are spinning and see what happens when the reels stop. They both appear on the reels too, so there is a chance they could help you win prizes. As you might guess, there are various bonus elements that can occur during the game. Watch out too for the path, as this will behave as a wild symbol. Could that path take you to a better win if it should appear? All three games are well worth a try if you have yet to discover them. NetEnt is always a reliable provider of great slots, and we think these three slots rank among the best they have created so far. See if you agree.
Play Now