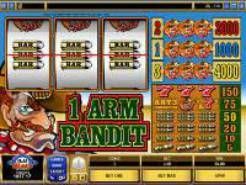 Play Now
From games that awarded free beverages to those that fall within the “Classic” games section at a land-based casino, there are plenty of slots that are considered one armed bandit games. Today, some casino gamblers still refer to slots by this antiquated name, even if they’re massive, multi-line wonders that are only available in an online casino environment.

Much of the history of gambling is murky, and the history of the slot machine is no different. It is known that Stittman and Pitt, both of Brooklyn, New York, created a precursor to the slot machine. It took a nickel to play, but instead of winning cash, it awarded winners with free drinks and cigars. Most machines heavily favored the bar owners, which gave the machines an odious reputation early on. There is a great deal of mystery surrounding the first slot machine, but many historical experts agree that the game was built by Charles Fey in San Francisco, California. The most disputed point is the year that the machine was created, although most believe that Fey built his first game in either 1887 or 1895; this was the first slot to award cash to players when they won, and created slot play as we still know it today. The creation of the first machine that was referred to as a one armed bandit was a non-electric game that was powered by the player, who would pull the side lever in a downward direction, using their arm. This single-lever mechanism and its propensity to take a player’s money earned it the name, “one armed bandit”.

When a player walks into a land-based casino, they may still encounter slot machines with side levers; even though the games are now at least partially controlled by electrical components, the presence of single lever ensures gamers that they’ll be enjoying a game that’s somewhat reminiscent of the original one armed bandit. While the name of the machines may have reminded players of an outlaw who was out to take their money, the negative connotation did not keep players from spinning the reels; in fact, the popularity of the games skyrocketed, and they began appearing in more and more places.

The mining era of American history gave way to one armed bandit slots in places that they had never appeared before; when miners knocked off for the day, they often landed in saloons, where they drank, smoked, swore, and spun the reels in these new one armed bandit games. The miners and their association with such games led to a wide range of today’s slots, including those with an Old West or a Wild West theme. Whether today’s casino gamers choose to play their favorite titles in a physical casino or at a web-based gaming establishment, they’ll always remember that their games are steeped in history.

Play a Version of the One Arm Bandit Today

Game designers around the world have leaned on the gold mining era’s association with slot machines, and have turned it into an industry with plenty of Western-themed games. Some of today’s online Old West slots titles include Gold Rally Slots , Six Shot Showdown Slots , Wanted Dead or Alive Slots , Gold Rush Showdown Slots , and even one that’s actually called, 1 Arm Bandit. Play today for your chance to win while enjoying a historically relevant style of gaming.

Where to Play 1 Arm Bandit Slots