Head to Egypt in two super slots from Spinomenal 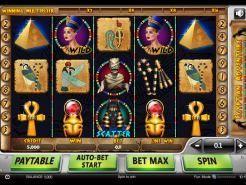 Play Now
You don’t need to look around the internet for too long to realize that Egyptian-themed slots are incredibly popular. Virtually every provider of slot games has at least one title that would sit comfortably in this category. Take Spinomenal, for example. This company has some superb games to try, and two of them are based on ancient Egypt. Let’s look at what these games can offer, so you can work out whether you would like to give them a shot. By the way, these can be played for free and for fun, as well as for real cash prizes.

If you’ve tried a few Spinomenal games already, you might have encountered the winning multiplier feature. This appears to the top of the reels, and increases as you get more consecutive wins on the reels. In the Egyptian Adventure slot, you can go as high as x16 with this feature. The game shows Cleopatra as the wild, and a slightly alarming character as a scatter symbol. You’ll recognize this one from Egyptian books or pictures you might have seen. Three or more of those scatters will secure 10 free spins for you, which should get you well on the way to some more prizes.

From an adventure to a rebirth, but what does this refer to? Perhaps it’s the eerie-looking mummies that appear on the screen as you play. There’s far more to discover though, from a flaming egg used as a scatter, to the mummy in its ornate coffin used as a wild. Wilds work in the same way you’d expect them to, but they also add multipliers if you get two, three, or four on a line, ranging from x2 up to x8. The free spins egg icon delivers five, 10, or 15 free spins for three, four, or five of them, and an increasing multiplier on the prizes as well. It would be either x2, x5, or even a huge x10 on your prizes. With surprise wilds and a bonus feature as well, this game does pack in the perks! So, if you want to try an Egyptian-themed slot , you cannot do any better than to try these two from Spinomenal. They have lots to tempt you with, and there are some neat features and quirky symbols to enjoy too. Which game will you prefer when you try them?
Play Now